What is a Haiku?

My favorite poetry style is a Haiku (plural Haiku).

poetry. It contains a numerical value of seventeen unrhyme syllables compose in three lines of 5-7-5. The Haiku traditionally evokes images of the natural world.
When the three lines refer to the human conditions the Haiku is called: Senryū (川柳) literally means "river willow" or Human Haiku.

Enjoy my Human Haiku dedicated to the Senses:
Senses Haiku

Unheard
Voice without sound,
Are we listening to others?
Attend to be heard!
Tasteless
Life without flavor,
Empty, gloomy, dim, tasteless,
Toss color to your life!

Untouched
Undesirable!
How could this be possible?
Humans need humans.
Intuition
One precious value!
Watch, sense, listen, and feel,
Follow it on your path.

SLIDESHOW Visit: http://www.luzdelmes.com/ldm.php?ldm=poems
For this month readings, I present to you my Award Poetry Book: 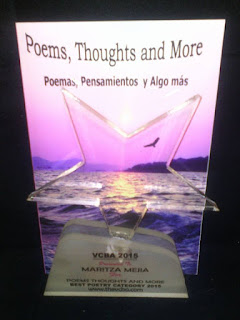 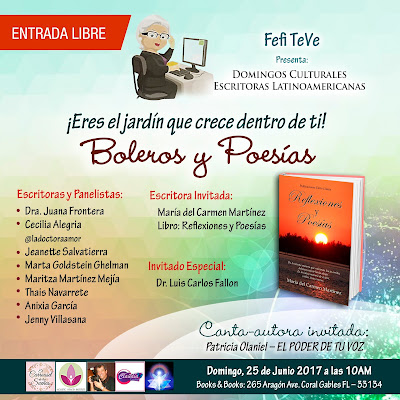 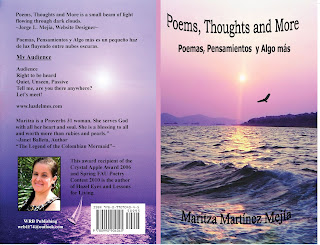 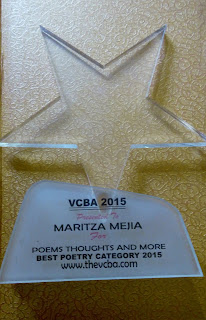 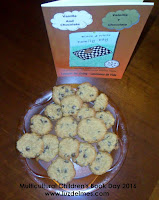 For reviews about this book Visit:  https://www.goodreads.com/book/show/16249983-vanilla-and-chocolate-vainilla-y-chocolate
For more activities visit: http://www.luzdelmes.com/ldm.php?ldm=learningactivities 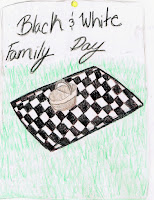 MAIN SETTING:
Vanilla and Chocolate main setting is at the Black and White Day
where the plot gets to its pick
and the development of the story mainly takes place.

FRONT COVER
Vanilla and Chocolate was written to help children
understand the virtue of Tolerance.
Race does not matter as long as you tolerate and appreciate each other’s differences.
www.amazon.com/Vanilla-Chocolate-Vainilla-Spanish-English/dp/098567623X

BACK COVER
Vanilla and Chocolate invites the reader

to talk with children at home or at school about this topic.
Each story contains a vocabulary page and questions for discussion. www.amazon.com/Vanilla-Chocolate-Vainilla-Spanish-English/dp/098567623X


NEW CHARACTERS ON SUMMER 2017
www.luzdelmes.com
Posted by luzdelmes at Friday, June 23, 2017 No comments: 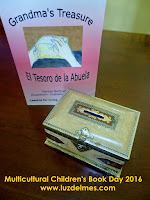 When Grandma Rose comes from Bogotá to Florida, she brings her Treasure Box with her
to Teach a Lesson for Living 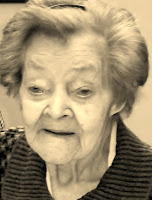 FIRST CHARACTER: Grandma
From: Grandma’s Treasure
An upset Grandma teaches their grandchildren a lesson for life to value what they have as she reveals her most valuable treasures when she was a child.
Why do you think Grandma was upset?http://www.luzdelmes.com/ldm.php?ldm=learningactivities

SECOND CHARACTER: Girl
From: Grandma’s Treasure
The Girl is not playing nicely with her brother and Grandma was observing the scene...
Guest what happen then?
http://www.luzdelmes.com/ldm.php?ldm=learningactivities

THIRD CHARACTER: Boy
From: Grandma’s Treasure
The Boy was concern about his Grandma…”Where is she,” ask the Girl.
“I think I know,” reply the Boy.
Where do you think she is?
http://www.luzdelmes.com/ldm.php?ldm=learningactivities 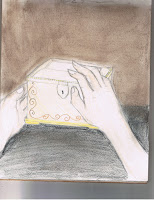 MAIN SETTING: Grandma’s Treasure main setting is at the Attic where the main events happen while Grandma revealed her values treasures.
MAIN IDEA: Teach a lesson of appreciationhttp://www.luzdelmes.com/ldm.php?ldm=learningactivities

FRONT COVER
Grandma’s Treasure was written to help children understand the virtue of appreciation.  Learn to value what you have or do not have.
http://www.amazon.com/Grandmas-Treasure-Maritza-Martinez-Mejia/dp/0989624773/ref=la_B009DKDXFW

BACK COVER
Grandma’s Treasure invites parents and teachers talk with children about Gratitude. Questions and Vocabulary Page for classrooms or home included.

Expect the sequel on FALL 2017

was amazing
Posted by luzdelmes at Thursday, June 22, 2017 No comments:

Step by Step...Paso a Paso