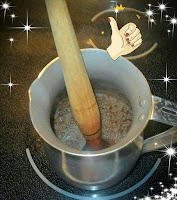 Preparation:
On the stove, put the ingredients together to boil inside the chocolate pot. Add cinnamon sticks if you want to add a special flavor to the beverage. When is ready, whisk gentle to mix well. Serve hot with mozzarella cheese inside if desired.
Share your traditions! 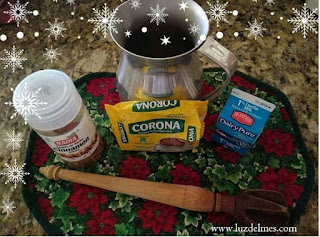 Turmeric Latte
Sharing traditions!
My dear friend from India suggested me to try a healthy Turmeric Latte. It is essy, she said,
"Put one cup milk in sauce pan for boiling.
Add 1/4 spoon turmeric powder to it. You can use raw turmeric instead of powder.
Boil for 2-3 mins. Strain in Cofee mug.
Add one spoon honey. 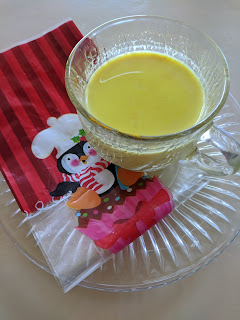 Maritza M. Mejia writes to inspire others to be their best selves.

Nicholas was born at Patara, a seaside town in Licia, in southern Turkey, in the third century. He came from a good family that raised him as a Christian. His life, from his earliest days, was marked by obedience. When he was orphaned at a young age, Nicholas, remembering the rich young man in the Gospel, used his inheritance to assist the needy, the sick, and the poor. He was elected Bishop of Myra, and under the emperor Diocletian was exiled and imprisoned. After being freed, he attended the Council of Nicea in 325. He died in Myra on 6 December 343. Many stories have been handed down about Nicholas, all testifying to a life spent in service to the weak, the small, and the defenceless.

Defender of the weak

One of the most ancient stories about Saint Nicholas involves a man with three daughters of marriageable age. The family was poor, and the young girls were in danger of being forced into prostitution, because their father could not afford to offer a suitable dowry. One night, Nicholas went to the family’s home, and threw a bag of coins through the open window -- then fled before he could be identified. With the money, the father was able to procure a marriage for his eldest daughter. Nicholas returned twice more, always at night so that he could not be identified. But the third time, the father rushed out of the house to identify his mysterious benefactor. Nicholas begged him not to tell anyone what he had done.

Another story relates the fate of three young theologians travelling to Athens. Along the way, they stopped at an inn, where they were robbed and killed by the innkeeper, who hid their bodies in a barrel. Saint Nicholas, then a bishop, stopped at the same inn when he travelled to Athens. In a dream, he saw the crime that had been committed by his host. Turning to prayer, Saint Nicholas miraculously restored the three young men to life, and obtained the conversion of the wicked innkeeper.

A third story tells how Saint Nicholas freed a young boy, Basileos, who had been kidnapped from his home in Myra, and forced to serve as a cup-bearer for a foreign potentate. While his parents prayed for his safety, Saint Nicholas appeared to Basileos, and miraculously restored him to his family -- still holding the potentate’s golden cup.

Protector of seafarers: St. Nicholas is also the patron of sailors and seafarers. When he was a young man, Nicholas boarded a ship to take him on a pilgrimage to the Holy Land. Following in the footsteps of the Lord, Nicholas prayed that he might be able to experience more fully the closeness of Jesus, and share in His sufferings. Returning to Greece, a frightful storm arose, and the ship he was on was in danger of flooding. Nicholas calmly prayed, and suddenly the wind ceased and the waves died down, to the wonder of the sailors, who feared shipwreck.

Saint Nicholas of Bari: After the death of Saint Nicholas, his tomb at Myra soon became a place of pilgrimage; his relics were considered miraculous on account of a mysterious liquid that flowed from them, known as the “manna of St Nicholas.”

Santa Claus:In the Low Countries, and throughout Germanic lands generally, the winter feast of Saint Nicholas (in Dutch, “Sint Nikolaas” and later “Sinteklaas”), and his patronage of the young, gave rise to the tradition of giving gifts on his feast day: on the Eve of his feast, children would leave socks or shoes on a chair, or next to the fireplace, and go to sleep trusting that the following morning they would be filled with gifts. 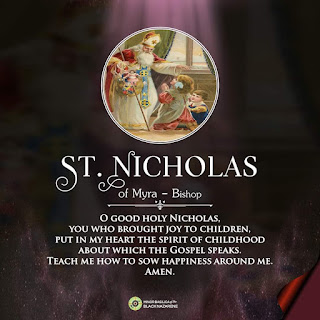 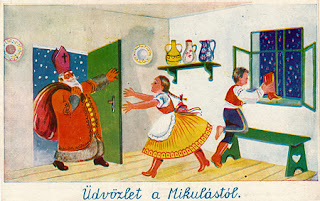 Maritza M. Mejia writes to inspire others to be their best selves.

For Christians, December is a time of preparation for Christmas. During four weeks of waiting period called Advent, we prepare an Advent Wreath. Each Sunday a candle will be lit. The first, second, and forth candle are purple and the third candle is pink color. These colors represent a time of preparation and joy for the birthday of Jesus; reason for the season. This year, I invite you to set aside the commercial rush and find the real reason of the season. Don’t forget to collect family memories not possessions.
Many blessings! 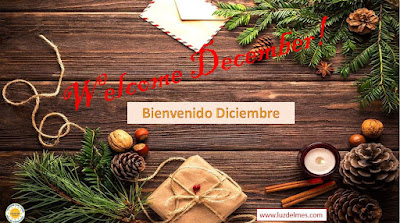 Posted by luzdelmes at Wednesday, December 01, 2021 No comments:

Advent season marks the new Liturgical calendar year in the Roman Catholic Church and many Christian Churches. It is also the beginning of a four week period of preparation in anticipation of the Nativity of Jesus Christ at Christmas and the reminder of Christ’s second coming. Each week has a meaning, color and expectation. Let's celebrate Advent with joy and hope for a better tomorrow.

What does it mean?

The emphasis is on our longing, our need — not only for the great graces of the feast of His Nativity, for the renewing in our hearts of the mystery of His birth — but our need to be ready for the glorious moment of His Second Coming.

Prepare an Advent Wreath with paper or using a donut and birthday candles. Each kid bring home the devotion to prepare during Advent. 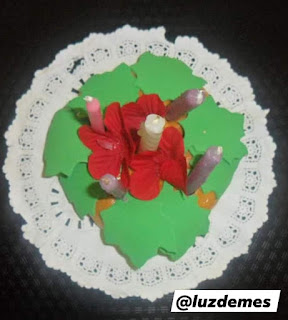 CLOSING NOVEMBER GIVING THANKS TO ALL WHO SUPPORT @Maritza Martínez Mejía, AWA

Bilingual Mother, Educator, Award-Winning Author, Speaker and Translator writes to inspire others to be their best selves.
FREE activities at www.luzdelmes.com 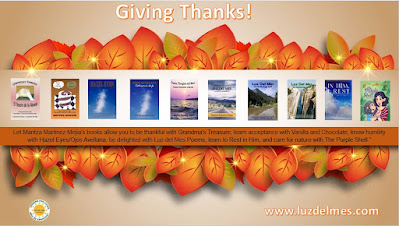 On her first trip to the sea, a lovely girl realized how much garbage people leave in the sand and decided to clean up the beach with her mother. After collecting sodas and wraps, they found a purple shell, which they received with joy as a reward for such a laudable task.

This book contains facts and questions to take care for our planet, our common home. 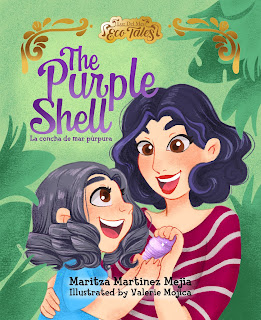 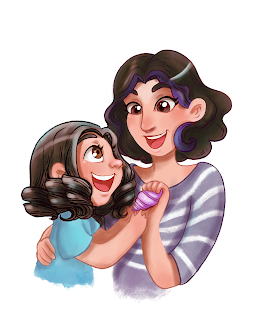 During November, in some places, is commemorated the Day of the Death and Thanksgiving. Life and Death part of our essence. I invite you to give thanks for your love ones and not only for what we have, but for what we don't have. Be generous and share with the less fortunate your blessings.
November Quatrain
All ghosts are gone
All souls remembered
Preparations are done
Welcome November! 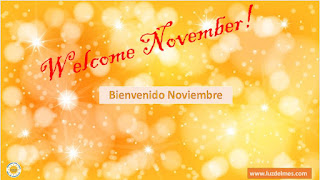 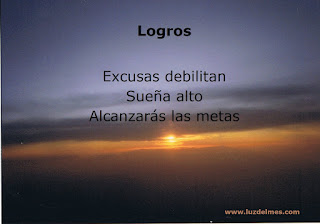