Poets around the world have defined PEACE in diferrent ways using various literary images. It can mean world peace, peace between friends, family, or inner peace. Whichever meaning of peace you're looking for, LuzDelMes project is sharing a moment to reflect on the meaning of PEACE throughout POETRY. Join us the last Saturday of each month at 10:00 a.m. ET via Zoom & Instagram. 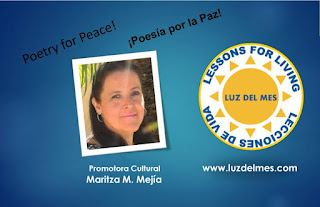 During the month of January, we read poems by Rabindranath Tagore (May 7, 1861 - August 7, 1941) The bard of Bengal who brought out the essence of Eastern spirituality in his poetry like no other poet. His spiritual vision, as he said, is infused "with the ancient spirit of India as revealed in our sacred texts and manifested in the life of today."

Tagore wrote this poem as part of his cycle, "The Gardener" (1915). He uses "peace" in the sense of finding peace in the face of impending death.

Watch Video: January:
https://www.youtube.com/watch?v=jNG5gVUsopw&list=PLcYPLWMCCkBvNmz0pusWECCh5eOHRciaq&index=1&t=30s
During February, Black History Month, I chose Maya Angelou (born Marguerite Annie Johnson; April 4, 1928–May 28, 2014). She was a celebrated poet, memoirist, singer, dancer, actor, and civil rights activist. Her autobiography, "I Know Why the Caged Bird Sings," a bestseller published in 1969 and nominated for the National Book Award, revealed her experiences growing up as an African American during the Jim Crow Era.

Maya Angelou "The Rock Cries Out to Us Today"-Segment-

...The Rock cries out today, you may stand on me,But do not hide your face.Across the wall of the world,A River sings a beautiful song,Come rest here by my side.Each of you a bordered country,Delicate and strangely made proud,Yet thrusting perpetually under siege.Your armed struggles for profitHave left collars of waste uponMy shore, currents of debris upon my breast.Yet, today I call you to my riverside,If you will study war no more. Come,Clad in peace and I will sing the songsThe Creator gave to me when I and theTree and the stone were one...

During March, I selected Emily Dickinson (December 10, 1830–May 15, 1886) was an American poet best known for her eccentric personality and her frequent themes of death and mortality. Although she was a prolific writer, only a few of her poems were published during her lifetime. Dickenson’s poetry—nearly 1,800 poems altogether—has become a basic of the American literary canon.

Emily Dickinson: "I Many Times Thought Peace Had Come" -Image-

In Dickinson two-stanza poem, she uses the image of the sea to represent the waves of peace and struggle. Peace sometimes means peace within, when we are facing inner struggles, but peace in the world can also be illusory. 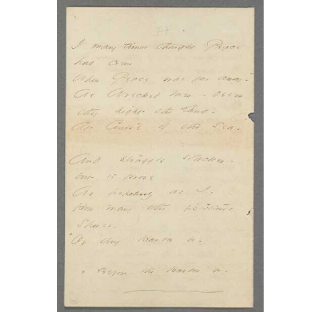