I met author Mark Albini at the Miami Book Fair 2016. He generously gave me a free copy of his first Rescue Ranch Series Book, Jimmy the Giraffe. In 2017, I received the second and third book of the adorable collection of Farm animals with a lesson to tell.
Since this month is dedicated to Rhyming Picture Books, I invited Mark. His books are told in perfect rhyming style. 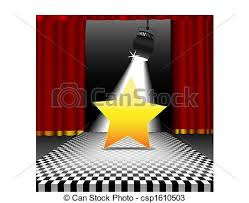 Why did you create the Rescue Ranch?
There is a 2 part answer to this question. I never planned on being a writer. I’m a Real Estate Broker but approximately a year ago I spoke to a friend of my wife who was an artist. She was complaining that she didn’t have any artwork or art projects that were paying her enough money to make a living.  Therefore she had to work as a cashier at a grocery store to make ends meet. I offered to write a children’s story and let her do the art work. If it turned out to be any good we would try to sell it and make some money. A week later she returned from vacation. I had written 4 stories that week but she was no longer interested in doing the art work. She and her husband were moving to Colorado.
Creating the Rescue Ranch was not my initial focus. Writing fun animal adventures that were connected to one another in a series is how it all started. I’ve always loved animals and as a small boy I spent countless hours watching the local wildlife and their behavioral patterns in the nearby woods. During the summer months I visited my Grandparents farm in Arkansas and learned about animal life in that setting. Those were some of my fondest memories and as I wrote these short stories I found it to be fun. It didn’t feel like work. I also saw the opportunity to use the money to help rescue animals at the local animal shelter. So I continued to write for enjoyment.

How many stories are in the Rescue Ranch Series?
There are currently 16 stories written. Three have been published and book #4 titled Sammy the Snake will be out next month. If the books do well I will continue to write more than the 16 that I have completed. I will continue to publish them as my finances allow. This series could go on forever because I introduce a new character animal in one story and that character will be the title of a story in the future. Following Sammy the Snake is book #5 titled Phillip the Frog, book #6 Henry the Hog, book #7 Lucy the Lion, book #8 Big Ben the Bear, book #9 Billy the Bobcat and Rocky Raccoon, book #10 Freddie and Eddie, book #11 Grant the Grizzly, book #12 Daisey the Deer, book #13 Darla the Doe, book #14 Tommy the Tiger, book #15 Sugar Shane and the Twins and book #16 is Scottie the Skunk and Mitch the Monkey. All are written in rhyme and they’re an animal adventure that has a lesson or a moral or teaches good manners.

Do I have any other project in mind?
I don’t have anything planned at this time but I have several ideas that all depend on the success that come from the sales of the Rescue Ranch Children’s Book Series. I have written many poems over the course of my life that I may try to publish. My father, Louis Albini, wrote approximately 10 short stories that were true events in his life that were very interesting. He was a Spanish Professor and author of Spanish Textbooks titled Galeria Hispanica. His text books were published by McGraw Hill and have been used from 1970 until a approximately the year 2000. There are only a handful of schools still using his text books today. He also wrote an eight hundred page Historical Fiction about the Aztecs that he never tried to have published. I may spend some time publishing that and have the money donated to the foreign language department in my father’s name at the high school where he taught.

Mark, could you please give us a Final Message.
My advice to anyone who is thinking of writing a book would be this: Follow your passion in life. If it’s writing then you should write. Be patient and enjoy the process because when you capture the imagination of an audience with words, or you if you have something important to say, it should be expressed with the passion you felt when you had the thought. If you do that then you will have brought joy to both yourself and your audience.
God Bless,
Mark Albini

My comments about Mark Albini Books: 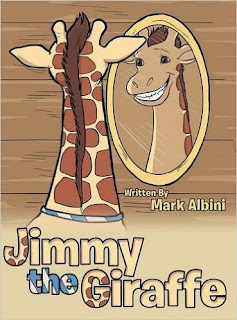 Jimmy the Giraffe
The first book in the Rescue Ranch introduces Jimmy the Giraffe with a deep of determination. With lovely illustrations and told in rhyme, the happy Giraffe learns an important lesson: "How to be yourself." 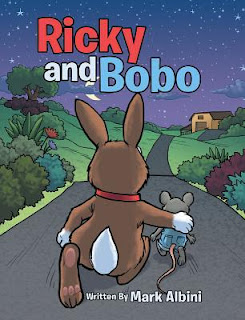 Ricky and Bobo
Excellent rhyming picture book for children ages 4-6 years old. Ricky and Bobo is the second book in the collection of animals who live at the Rescue Ranch. The adventure begins when Ricky the rabbit came out of the house with his friend Bobo the mouse. While they think would be a simple quest, it turns out into a dangerous venture.
First, the two friends encounter a swarm of buzzing bees. Then Ricky and Bobo have trouble in the water when they try to return home. Ricky prays for his friend to be saved and his prayers get answered. Ricky and Bobo learn an important lesson, don’t ever be bad and sneak out of the house unless you have a good friend like Bobo the Mouse. 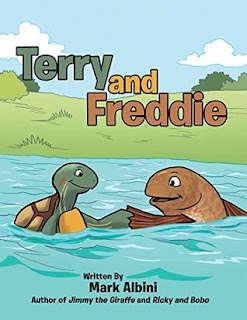 Terry and Freddie
The third book in the Rescue Ranch adventures introduces Terry the Turtle and Freddie the Fish who met at the pond. The rhyming story presents an important lesson about rules and the consequences to break it.
First, the two friends love to play and race. One day, Freddie made a mistake and broke an old rule not telling his mother where he was going before school was over. During the adventure the other animals from the Rescue Ranch came to watch the race, but they had a surprised visitor, Sammy the Snake who attacked Freddie. At the end, Terry came to the rescue and the two good friends had a good lessons to learn. Terry and Freddie promised to let his mother know all the places they might go.
I recommend these books and the series of Mark Albini for ages 5-8 years old - K-3 graders.
To know more about the Rescue Ranch visit: https://www.facebook.com/Rescue-Ranch-Childrens-Book-Series-1889522267947850/?fref=ts