This morning, we stopped at the Church of the Primacy of Peter, where Christ confirmed Peter as Head of the Church. (Matthew 16:18). We visited Capernaum, now in ruins but once a thriving town where Peter lived and where much of the public ministry of Christ took place. (Mathew 4:18-22) 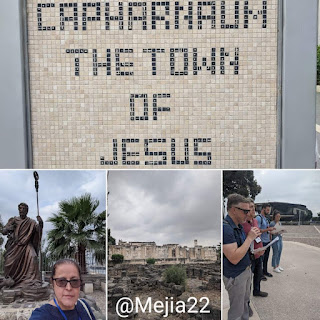 We continued to the  Mount of Beatitudes, where Christ taught the Eight Beatitudes to His Disciples (Matthew 5: 1-12). At this place, we celebrated Mass and I read the First Reading in honor of my father on the Day of the Holy Cross. 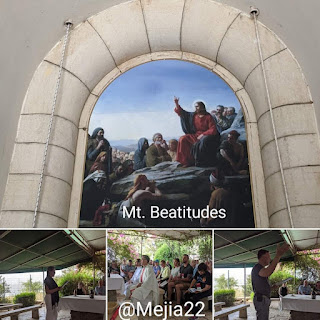 We proceeded to Tabgha, one of the most important sites in Galilee, the place where Jesus feeds five thousand. (Matthew 14:13-21). In some homilies, I have heard that it was a "miracle of sharing,"but I believe in the narrative of all four Gospels, Jesus fed a huge  crowd with a few loaves of bread and some fish

Later, we visit Mt. Tabor, place of Jesus’s transfiguration (Matthew 17:1-9).  We left the bus and transferred to a taxi for the ascent to the top. We visited the site of the Transfiguration and celebrated Mass in this marvelous place. Mass: 11:00 am. 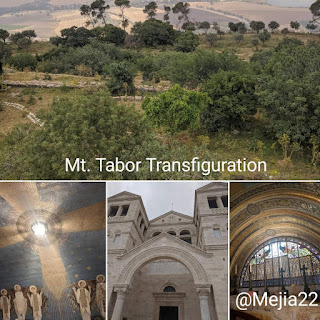 Nearby, seven freshwater springs flow into the Lake Gennesaret known also as Sea of Galilee (not a sea, but a lake). Its name Heptapegon, from Greek, means "Place of the Seven Springs." It marks where Jesus called the first disciples. (Luke 5:1-11)

Then, we proceeded to Bethany on the east side of the Jordan River, where Jesus was  baptized by John the Baptist before His public ministry. (Luke 2:21-22) (John 2:28). We renewed our Baptismal vows. 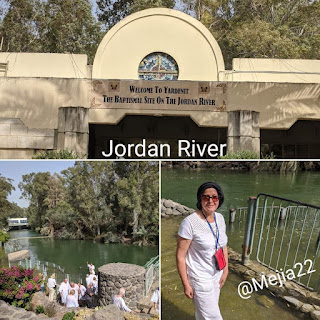